The Structure of the Drum
What are drums made of?

The tonal quality is determined by the tightness of the head.

A ring called the hoop is used to attach the head to the shell, and the tuning bolts are tightened to tighten the head. The hoop is supported by the lug, and the hoop and lug are attached using a tuning bolt. Long ago, animal skins were used as drum heads, but now drum heads are primarily made of plastic. Basically, when the tension on the head is higher, the tone is higher, and when the tension is lower, the tone is lower.

The tom-tom has the simplest structure

The tom-tom has the simplest structure of all the drums, and there are two types: those with heads on one side and those with heads on both sides. It is possible to play a melody with a series of 10'', 12'', 14'', and 16'' tom-toms with their heads properly tuned. When used as part of a drum kit, they are usually attached to the top of the bass drum or to an independent stand.

Names of the parts of the tom-tom 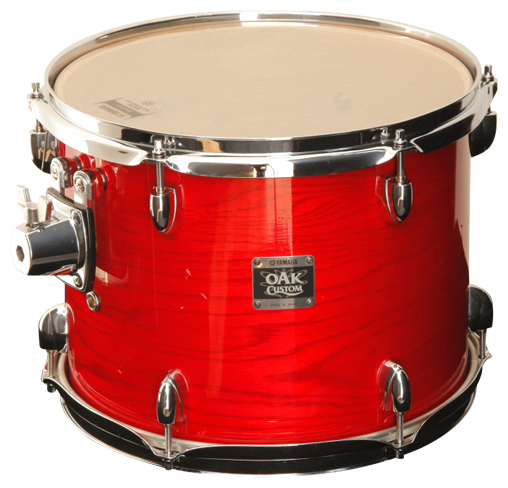 Why is there a hole in the bass drum head?

The bass drum has heads on both sides of the drum, and the drum is placed on its side and is beaten with a foot-operated pedal. By the way, about the time that Dee Dee Chandler conceived of the drum kit in New Orleans about 1900, a foot pedal seems to have already been attached to the bass drum.

Names of the various parts of the bass drum 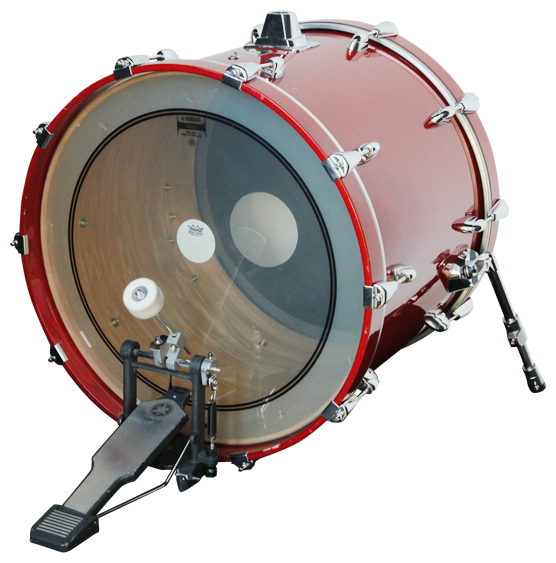 Some bass drums have a hole in the front head (the head that is not struck by the pedal). This hole serves to amplify the attack of the tone when the drum is struck. The hole is often found in rock drum kits because this attack is preferred, while it is not found often in jazz drum kits, because it is not desirable in that musical genre. Heads with holes can be purchased, but it is not uncommon for drummers to cut a hole in an existing head with a box cutter. This practice is said to have started in recording studios, where a cymbal was place on the head and used as a template to cut out the hole. Microphones were inserted into this hole to get a better recording.

The shell also has small holes in it, called air holes or vent holes, and this bass drum has five such air holes. Without these holes, the drum has a muffled sound. An additional function of these holes is to limit the backlash on the foot that is created when the drum is struck and the opposite head bulges out and snaps back. In other words, providing a way for the air to escape creates a better tone and is easier to play.
The floor tom, tom-toms, and snare drum also have air holes. The larger the volume of the drum, the more air holes there are.

Some snare drums are made of metal

Finally, we address the snare drum. The snare consists of pieces of curled wire that reverberate. The snare is stretched across the bottom head and is held in place by the strainer on both ends. A lever is used to tighten the snare so that it is right up against the bottom head, and when the top head is struck, the snare makes a sharp rasping sound.

The bottom head is thinner than the upper head to improve the response of the snare.

Names of the various parts of the snare drum 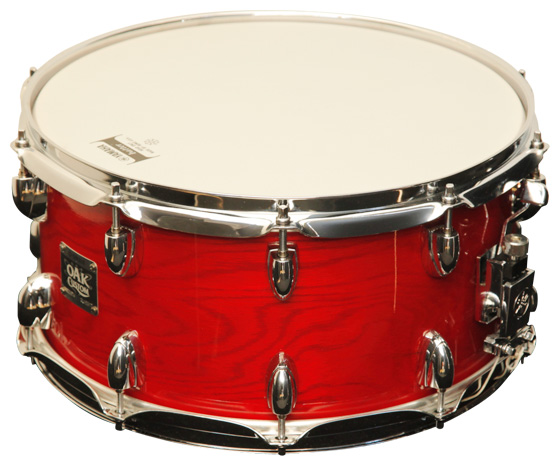 Snare drum shells are made out of metal as well as wood, and they have different timbres. Wooden shells have a warmer tone, while metal shells have a brighter tone. The type of wood used also affects the tone, and of the metal drums, brass has a brighter and richer tone than steel, while aluminum is known for its sharp, tight tone. This difference might be difficult to detect on a website, but the difference is unmistakable when listening to them live.

The larger drums are typically made of wood, while the snare comes in different materials to suit different tastes.