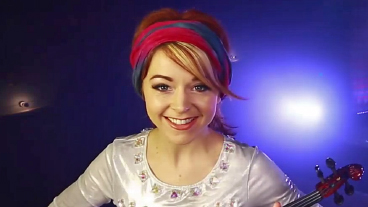 Lindsey Stirling is one of the biggest artist development breakthrough stories in recent years. A classically trained violinist from Gilbert, Ariz., Lindsey has entered a futurist world of electronic big beats and animation, leaping through the music industry with over 7 million YouTube subscribers, over 1 billion views on her YouTube channel, Billboard chart-topping hits and sold out tours worldwide. She’s created a new music world where the romance of Celtic folk music and modern classical meet the infectious energy of dance and electronica. On stage, Stirling moves with the grace of a ballerina but works the crowd into a frenzy, “dropping the beat” like a rave fairy.
Lindsey's self-titled debut album featured twelve original tracks; including the viral smash "Crystallize," which has racked up over 132 million YouTube views. The album earned her a 2014 Billboard Music Award nomination for Top Dance/Electronic Album, has sold 475,000 copies in the US without the backing of a major label, and has gone platinum in Germany and gold in Poland and Switzerland. The album reached #1 on Billboard’s Dance/Electronic Chart and Classical Album Chart and peaked at #23 on the Billboard Top 200.
On April 29th, 2014, Lindsey released her sophomore album "Shatter Me" which debuted at #2 on Billboard's Top 200 album chart and has sold over 295,000 copies to date in the US alone. The album includes a collaboration with Halestorm lead singer Lzzy Hale on her smash single "Shatter Me," which has over 40 million views on YouTube. The album most recently won a 2015 Billboard Music Award for Top Dance/Electronic Album.
Next up, Lindsey will be releasing her first book with Simon & Schuster, a memoir called "The Only Pirate at the Party" which she co-wrote with her sister, Brook S. Passey. The book will be relased on January 12, 2016.
Stirling is the model of a modern independent recording artist, with a symbiotic relationship with her fans. A motivational speaker in her spare time, Stirling uses her own story to show teenagers that you've got to have confidence in the very thing that makes you unique – then wait for the world to catch up.