A pipe for every sound

The pipe organs found in concert halls are large scale instruments, with many metal pipes. Only some of these are visible, but back-stage there are actually many thousands of pipes - almost like a forest.
The reason several thousand pipes are needed is that one pipe can only produce one sound. One pipe might produce only a C-pitch sound with the timbre of a flute, for example, while another might be made to generate only a D-pitch sound with the timbre of a trumpet.
With a range of 56 notes from the lowest note to the highest, 56 pipes are required for each timbre of sound desired. In a case where 3 different timbres are sought, perhaps for a trumpet timbre and a flute timbre, three times as many pipes as the number of distinct tones in the range are required, making a total of 168 pipes.
This is to say that the more timbres of sound available on the organ the more pipes it needs, and the more gigantic it becomes!

Names of the parts of a pipe organ 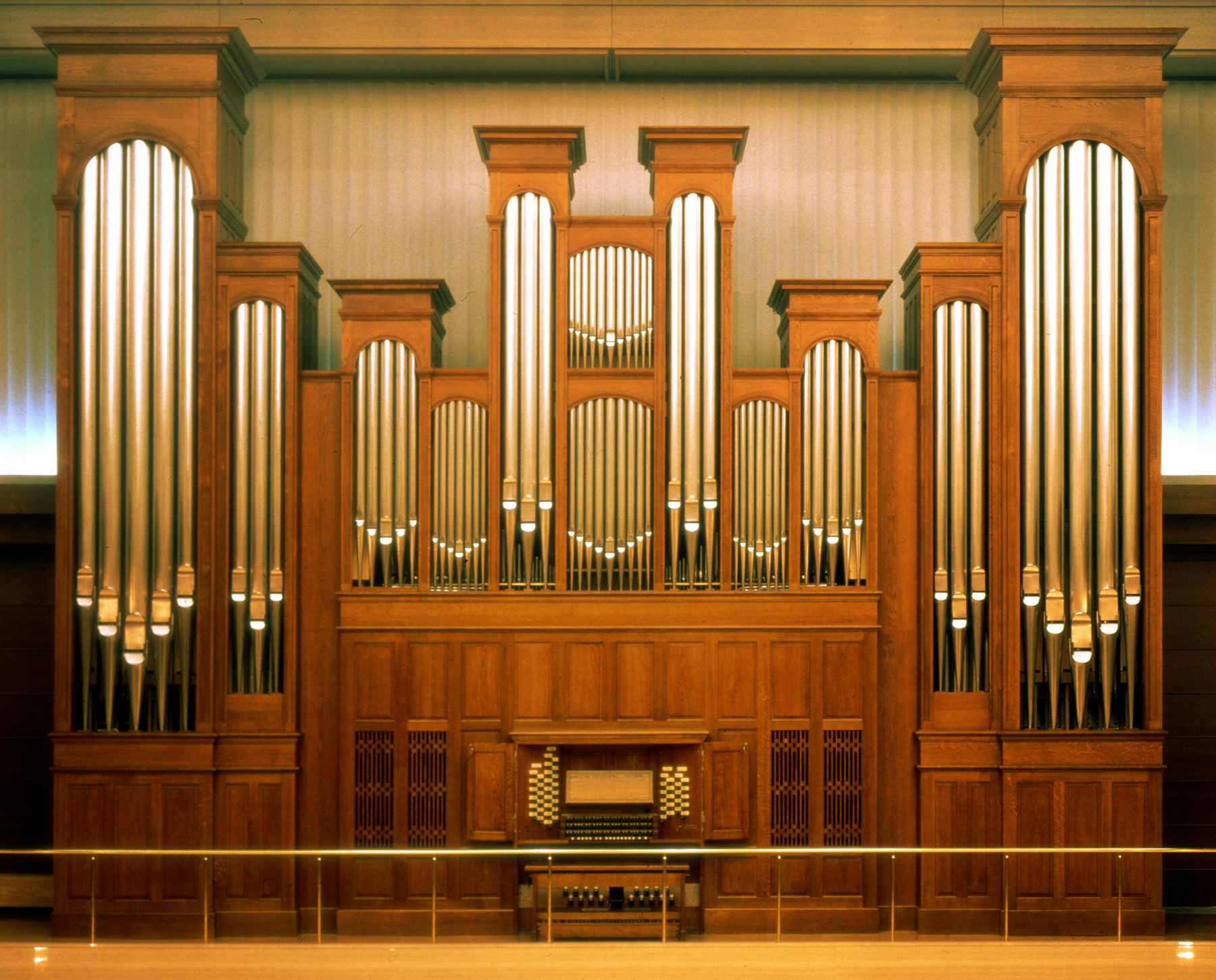 Parts of a pipe organ console 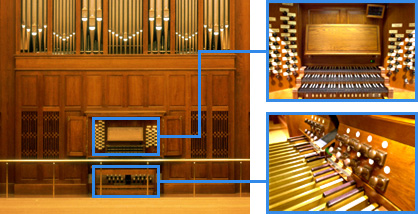 When playing a recorder, the length of the air column can be changed by covering holes with one's fingers, but with a pipe organ this is not possible. For that reason, the lengths of the pipes vary like a series of steps to produce the notes of a musical scale.
By clever use of different pipe materials and pipes of different shapes, these can be made to emit different timbres, with the intention of producing sounds that imitate various other instruments. With a pipe organ, a single timbre is referred to as a "stop." For example, an organ with three timbres is called a "3-stop organ."

How sound is produced

A pipe organ feeds wind into pipes, causing the air to oscillate and produce a sound. The pipes stand in line above the box referred to as the wind-chest, with wind fed from below into the pipes the organist wishes to use to produce sound. The mechanism by which the pipes produce a sound when pressurized air is fed into them follows the same principle as when a recorder is played.

The pipe that will sound is selected using the stops and the manuals. The stop is used to switch between timbres, while the manuals select the tone (C, D, E, etc.) to be played. The mechanism driven by the manuals operates vertically through the wind-chest while the stops function horizontally, to form an arrangement that resembles an interconnected matrix, like a three-dimensional grid.

Let's say that a pipe is positioned at every point where these vertical and horizontal components intersect. First, the group of pipes that play the desired timbre are selected by pulling the stop, which moves a slider (a slat that opens holes). This slider is aligned with the holes below the pipes, preparing the mechanism so that wind is fed only to the set of pipes for the timbre that has been selected.
Then, if the manual key for C is pressed, wind is fed into the channel for the tone of C. This passes into the pipe for the selected timbre and produces sound. In other words, wind is fed into the pipe that has been selected both horizontally and vertically. The wind enters from below.

For example, if the stops for both the trumpet and flute are pulled, by pressing just one key on the manual both of these two timbres will sound at the same time. In the same way, it is possible to produce sound in all of the timbres simultaneously.

The role of closed tubes

Among the pipes, there are some that are covered and made of wood. These are called closed tubes.
Compared to a pipe of the same length that is not covered, a closed pipe produces a tone that is one octave lower. Also, compared to an open pipe, a softer sound with fewer harmonics is produced.