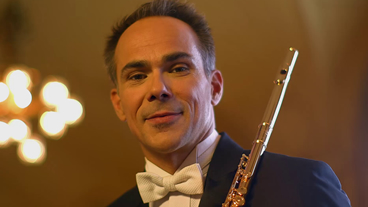 Mathieu Dufour is principal flute of the Chicago Symphony Orchestra, a position he has held since 1999. Before coming to Chicago, he was principal flute solo of the Paris National Opera Orchestra from 1996 to 1999. Prior to his appointment there, he served as principal flute solo of the Orchestra National du Capitole de Toulouse for three years.
Dufour began his flute studies at the age of 8 with Madeleine Chassang at the National Regional Conservatory in his hometown of Paris, France. At the age of 14, he was awarded the school’s gold medal by unanimous vote. He subsequently studied with Maxence Larrieu at the National Conservatory of Music in Lyon, where he was unanimously awarded first prize in 1993.
Additional awards include second prize at the Jean-Pierre Rampal International Flute Competition (1990); third prize at the International Flute Competition in Budapest (1991); and second prize at the International Flute Competition in Kobe, Japan (1997).
Dufour frequently appears as soloist in recitals and concerts around the world. He made his Carnegie Hall and Lucerne Festival debuts as soloist with the Chicago Symphony under Daniel Barenboim in 2002, and he also has performed under conductors Pierre Boulez and Christoph Eschenbach, among others. In January 2010, he appeared as soloist with the Orchestra and Boulez in Marc-André Dalbavie’s Flute Concerto. He is in demand as a coach and teacher and has led master classes in Canada, Japan, Europe and the United States. As a member of the Georges Cziffra and Juventus foundations, Dufour gave many recitals and concerts as part of their Young European Soloists Ensemble.
Dufour’s discography includes a solo recital of sonatas by Prokofiev, Martin and Hindemith; Poulenc's complete chamber music; and the complete works for flute by Roussel.

Mathieu Dufour talks about his career and Yamaha hand-made flutes