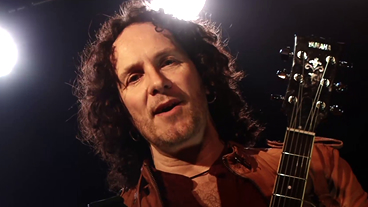 Born in 1962 in Belfast, Northern Ireland, Vivian Campbell began playing guitar at the age of ten. At the age of fifteen, together with Trevor Fleming, he formed Sweet Savage - a band that was to be a seminal influence on Metallica in ensuing years. In 1982 he was asked to join Dio, with whom he wrote and recorded the first three albums: Holy Diver, Last In Line and Sacred Heart. After parting ways with Dio he went on to play in many bands such as Whitesnake, Riverdogs and Shadow King. In 1992, he joined the rock band Def Leppard (replacing Steve Clark who died in January 1991) and has spent the last twenty years with the band, releasing eight albums (live & studio) and touring worldwide with the band. Aside from his work with Def Leppard, Vivian Campbell has been involved in various side projects including the band Clock. In 2005, he also released a solo album titled Two Sides Of If ,which features cover versions of his favourite blues tunes and one original blues song. Whilst Def Leppard were on hiatus in 2010 he was asked to join original Thin Lizzy members, Scott Gorham and Brian Downey, to tour with a reformed version of the band that had such a major influence on his playing.