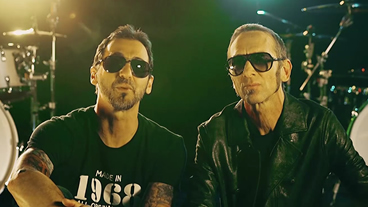 Sully Erna
Godsmack frontman and Yamaha Drum Artist since 2002, Sully Erna started playing drums at the tender age of 3 1/2 and was literally raised under the piano. Sully's father, a professional trumpet player, would rehearse in their home's basement with his jazz bands, and Sully would fall asleep in the empty acoustic guitar cases watching them practice. As he began banging on everything and haunting his mother for drums and lessons, they slowly found that no instructors would take him. They all felt it was a phase Sully was going through and that he would grow out of it. Sully's mother finally found a guy named Dave Vose from Berklee who was teaching at a local music store in Lawrence, MA, and agreed to take on Sully. By the time he was 5, he was playing the classic song "Wipeout." From that point on, Vose believed Sully had what it took to be a drummer.

By the time he was 11, Sully had bounced around with several different instructors until his current teacher found that Sully had a much easier time just hearing something and playing it than trying to read sheet music. With that in mind and being at the age where he was starting to get into rock music, Sully quit taking lessons and would just sit at home and rehearse to records by Aerosmith and Led Zeppelin most of the time.

By the age of 14, he was turned on to Neil Peart, who became his idol. Sully rehearsed to Rush records constantly. Bonham and Peart became his new instructors. Bonham showed Sully how to hit hard and have a great single foot, while Peart showed him how to have great hands and challenge himself. Soon afterwards, Sully started meeting different musicians and began playing in cover bands.

After years of playing in numerous bands, he signed his first record deal in 1993 with a band called Strip Mind on Sire/Reprise records. The band's debut album What's in Your Mouth sold less than 50,000 units, and the band self-destructed shortly after. Two years later, Sully started a new project under the name Godsmack. "And the rest," Sully says, "has been my dream come true."

Although he fronts Godsmack as the lead vocalist, Sully has also played the drums on the first two albums and has always recorded with Yamaha drums, including the Strip Mind record. "The sound and the feel has always been consistent, and they never let me down," stated Sully. "And as you can hear on my records, my influences through Bonham and Neil still shine through. I still like to challenge myself at times with intricate beats and killer fills, but I always enjoy the basic grooves being hard and heavy." (As of April, 2017)

Shannon Larkin
A Yamaha Drum Artist since 2002, Shannon Larkin started playing drums at the impressionable age of 10. Although his parents were not musicians, they were still music lovers and turned Shannon on to bands like The Beatles, Johnny Cash, Elvis, Credence, Joplin, Hendrix, and The Who. But it was his older sister who unknowingly ignited Shannon's passion to play by forcing him to listen to her favorite album, Rush's Hemispheres, over and over again. After that, he was turned on to Zeppelin-2 and that's when he decided to ask his parents for a drum kit.

On his 10th birthday, Shannon got a four-piece, blue sparkle drumkit with one cymbal and a copy of Iron Butterfly's "In-A-Gadda-Da-Vida"… with a promise that if he could learn the solo, he would also get a set of hi-hats and a stand. Two weeks later, Shannon got those hats and the stand.

By the age of 14, Shannon was playing clubs with his first band Wrathchild. By 16, he was touring coast to coast, playing mostly covers ranging from Black Sabbath and Zeppelin to The Stray Cats and GBH, mixing in as many originals as they could get away with. After five years of constant touring in a van and having a problem because of another act in Europe with the same name, the band finally got a deal signed with Atlantic Records under the name Wrathchild America. The band then released their debut album titled Climbing the Walls in 1989 and a sophomore release in 1991 titled 3-D. After minimal sales, the band again changed names to "Souls at Zero" and released two more records.

With frustration mounting, Shannon quit the band and moved to California where he joined Ugly Kid Joe. After making two records and touring for five years, the band decided to part ways. At that point, Shannon started doing a lot of session work for various artists like Glenn Tipton from Judas Priest, Doug Pinnick of King's X, and Vanilla Ice's come back record Hard to Swallow. Keeping busy, he played live shows for Candlebox, Black Sabbath, Snot, and Ozzy Osbourne. Around this time, producer Ross Robinson turned Shannon on to the seminal L.A. punk band Amen. After joining that band, doing two albums, and touring again for 4 1/2 years, Shannon still found time to land more session work, resulting in the recordings of Glass Jaw's Worship and Tribute and a tribute to his dear friend Lynn Strait entitled Strait Up, who was recently killed in a tragic car crash.

By this time, drama and internal conflict with Amen was beyond what he wanted to deal with. After being behind the kit for 25 years and being a firm believer of creating and playing music to be fun, Shannon quit Amen to find himself, strictly relying on his instincts and destiny to take over and guide him to the right place.

Two weeks later, destiny called in through a friend Sully Erna, offering him a gig as the new drummer for Godsmack where he has held down the drum throne since 2002. （As of April, 2017）