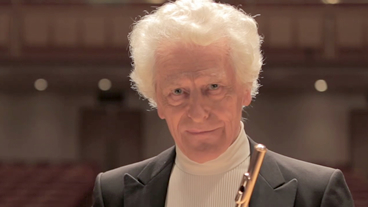 Peter-Lukas Graf is nowadays the doyen of internationally well-known flutists.
Along with winning the first prize at the Munich Competition, he was appointed the youngest ever principal flutist at the Winterthur and the Lucerne Festival Orchestra.
After a decade of mainly conducting operas and symphonic concerts, he has been a professor in Basle. The USA National Flute Association honoured him with a Lifetime Achievement Award. He received the title doctor honoris causa by the Music Academy of Cracow (Poland). From the Italian FLAUT Association, he received the premio di carriera flauto d'oro.