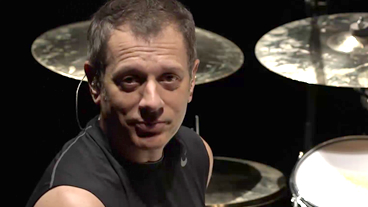 For more than 25 years, Dave Weckl has developed and maintained a reputation among fans, peers, and the international music community as one of the great living drummers.
Born in St. Louis Missouri, January 8th, 1960, Dave started playing drums around the age of 8. At age 16, Dave began to work professionally with local pop and jazz groups. In 1979, he moved to the East coast to study music at the University of Bridgeport in Connecticut.
While playing the club scene in New York City, Dave started to receive accolades from established studio musicians such as Steve Kahn, Michael Brecker, and especially drumming great Peter Erskine. It was Peter who recommended Dave for his first ‘big gig’ in town with a group called French Toast, forerunner to the Michel Camilo band. From this group, legendary bassist Anthony Jackson recommended Dave for the prestigious Simon and Garfunkel reunion tour in 1983. After this tour, Dave was regularly being called for radio and TV jingles, sound track sessions, and top recording dates with such artists as George Benson, Peabo Bryson, Diana Ross, and Robert Plant, to name a few. In 1985, Michael Brecker suggested to Chick Corea that he look into Dave's services for his new Electric Band. The Electric Band showcased Dave's cutting-edge drumming and innovative use of electronic and acoustic drums, bringing him world-wide recognition.
As a solo artist, Dave has recorded and produced nine recordings to date. In 1998, Dave realized his long-time goal of forming a world-touring band. The Dave Weckl Band released five studio records.
Dave regularly joins guitarist Mike Stern, Chuck Loeb, Oz Noy, and Chris Minh Doky and the Nomads, among others. When off the road, he keeps busy with session and production work at his home studio in Los Angeles.