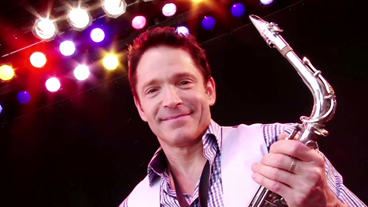 In a career spanning two decades, Dave Koz has established himself as a platinum-selling artist, humanitarian, entrepreneur, radio host and instrumental music advocate. Koz is a nine-time GRAMMY® nominee and has been honored with a star on the Hollywood Walk of Fame. His newest holiday recording, "The 25th of December" (Concord Records), features duets with such artists as Johnny Mathis, Eric Benét, Gloria Estefan, Heather Headley, Richard Marx, Kenny G, BeBe Winans, India.Arie, Trombone Shorty, Jonathan Butler, Fantasia and Stevie Wonder.
Dave is known for such hits as "You Make Me Smile," his signature song, "Castle of Dreams," "Can’t Let You Go" featuring the late Luther Vandross, "Together Again," "Honey-Dipped," "All I See Is You," and "Faces of the Heart," which was the theme song for "General Hospital" for more than 10 years. His 2013 album, "Summer Horns", recorded with friends and fellow saxophonists Gerald Albright, Richard Elliot and Mindi Abair, paid tribute to the high-octane, richly arranged horn sections that fueled hits across all genres in the ‘60s and ‘70s. "Summer Horns" was Dave’s sixth album to top Billboard’s Current Contemporary Jazz Albums chart and the quartet’s exuberant rendition of the Lennon/McCartney penned "Got To Get You Into My Life" spent seven weeks at No. 1 on Billboard’s Smooth Jazz chart.
Dave is constantly touring, with annual summer and holiday tours, and the highly successful Dave Koz & Friends At Sea. Koz, who has hosted four sold-out cruises thus far, will be exploring "The Ultimate Caribbean" with fans and fellow artists on his February 2016 cruise. Dave also continues to flex his mass-communications muscles as a radio personality with the syndicated "Dave Koz Radio Show" – now in its 20th year and airing in approximately 50 markets – plus "The Dave Koz Lounge," which airs Sundays on SiriusXM (Satellite radio), and "Dave Koz & Friends Radio," a 24-hour-a-day radio channel personally curated by Dave on SKY.FM Radio & JAZZRADIO.com multichannel internet radio services.
Koz has served for 19 years as global ambassador for the Starlight Children’s Foundation. He founded KOZ Wines in 2009 as another avenue to support the foundation. Dave donates all his proceeds from KOZ Wines, which are available at Whole Foods Markets® and other retailers and during select periods at California Pizza Kitchen, to Starlight.
He has also joined forces with Cary Hardwick and Laurie Sisneros, partners and owners of Spaghettini in Seal Beach, with the opening of a new restaurant/live music venue in the heart of Beverly Hills’ new restaurant row, Spaghettini and The Dave Koz Lounge.