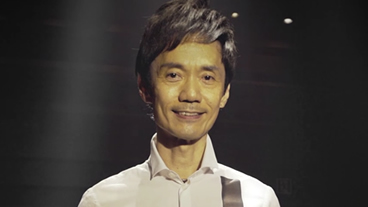 “The most well-known and respected Japanese drummer/musician in the world.” His prodigious technique and brotherly nature makes him a player whose renown is truly international.

Since his professional debut as a member of the group CASIOPEA in 1980, he has been leading the music scene as a top drummer for over a quarter of a century. Making full use of his MIDI Drum Trigger System, his unique playing style is what can be called a one-man orchestra. He continues to overwhelm his listeners with his performance, which covers a field never trodden by man, combining his astonishing playing technique with modern technology. This has earned him great respect both domestically and internationally. He received the #2 award in the UK drum magazine “RHYTHM”’s Reader’s Poll for Most Popular Drummer. In 2000, America’s “MODERN DRUMMER MAGAZINE” - the most influential drum magazine in the world, chose Jimbo to be on the cover, and they dedicated a feature article of over ten pages to him. He was not only the first Japanese drummer, but also the first Asian drummer to receive this honor. In 2003, the “RHYTHM & DRUM MAGAZINE”celebrated its 20th anniversary by conducting a first reader’s poll, where Jimbo won first place. In 2007, he was featured in Newsweek Magazine as one of the world’s 100 most respected Japanese.

Presently, he finds himself involved in a number of various projects and also keeps himself busy touring around the world, giving seminars and performances of his one-man orchestra style show.