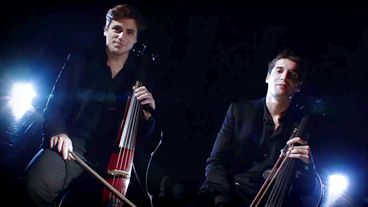 Young Croatian cellists Luka Sulic and Stjepan Hauser, known as 2CELLOS, achieved sensational success by taking the cello to a new level and breaking the boundaries between different genres of music. Their unique cello version of Michael Jackson's Smooth Criminal took the world by storm. Within only a week, this YouTube video became a huge viral sensation leading to a record deal with Sony Masterworks and an invitation to join Elton John on his worldwide tour.
Since then, the duo has appeared on major TV shows such as The Tonight Show with Jay Leno, The Ellen DeGeneres Show (multiple times), Lopez Tonight, TV Total with Stefan Raab and many others.
2CELLOS were also the first instrumental act to ever perform on the hugely popular TV series GLEE, performing Smooth Criminal. The 2CELLOS' arrangement of the song, which featured Naya Rivera, debuted at No. 10 on the Billboard Hot 100 Digital Songs Chart and landed the 2CELLOS' debut album in the Top 100.
Sulic and Hauser have played the cello since childhood; Sulic graduated from the acclaimed Royal Academy of Music in London, and Hauser from the Royal Northern College of Music in Manchester, both in 2011. Individually they have won prestigious prizes and awards, and have performed worldwide at renowned concert venues.
Luka and Stjepan's successes extend far beyond YouTube and their fan base continues to grow around the world. 2CELLOS have recently released their second album IN2ITION. The album was produced by the legendary Bob Ezrin (Pink Floyd, Alice Cooper, KISS, Deep Purple) and features an eclectic group of vocal and instrumental guests including Elton John, Steve Vai, Lang Lang, Naya Rivera and Zucherro.