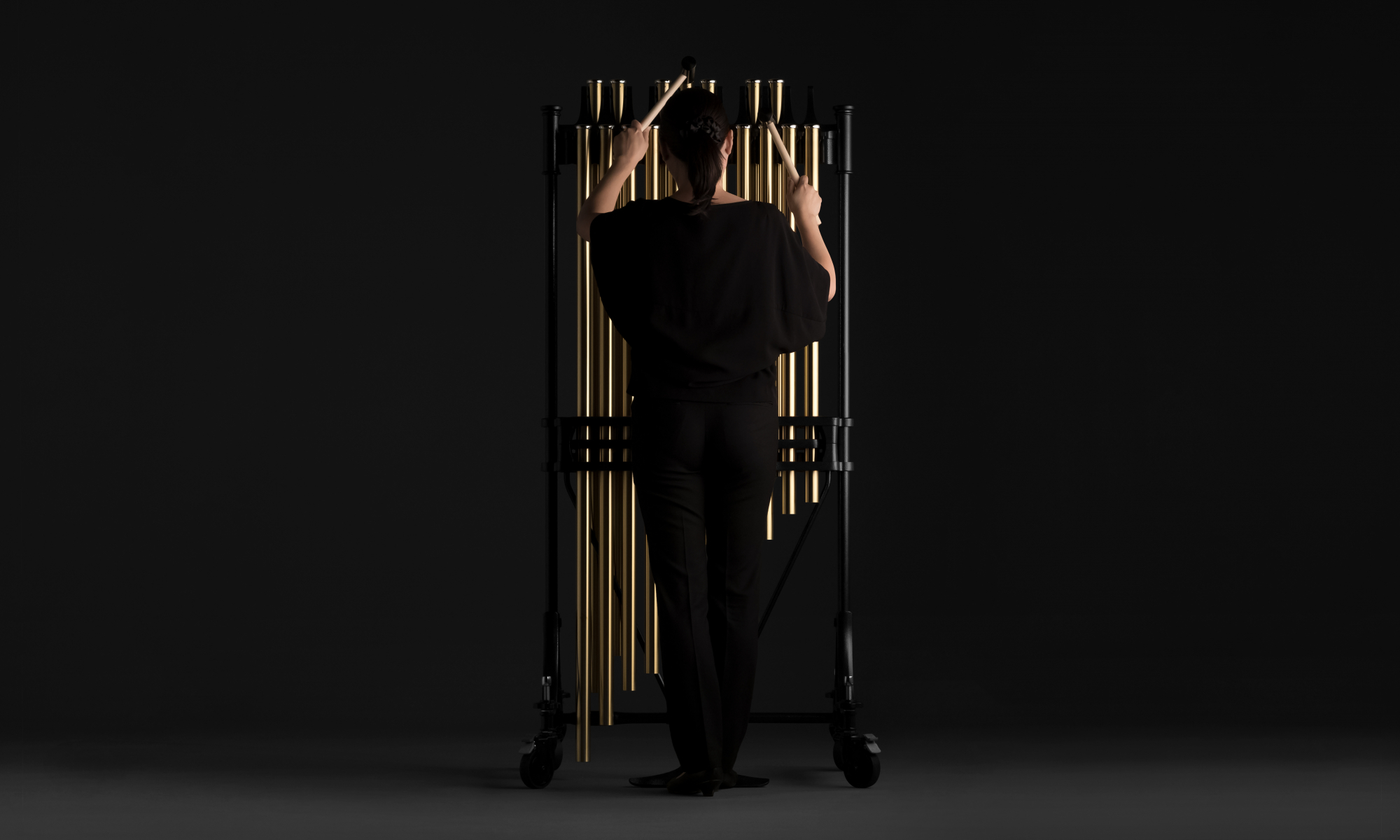 The chime tubes display the golden color of the brass material and the black frame that supports them, creating a contrasting color scheme. The black frame blends together with the performer and background, making the newly redesigned golden tubes stand out even more.

Chime tubes are typically hung from separate parts of the assembly in front and behind, but we have adopted a structure that rethinks the design and integrates those parts. The front and back tubes are placed close together in a beautiful horizontal arrangement, allowing for far better playability than in previous instruments. The lighting has been designed such that highlights are reflected horizontally to showcase the orderly arrangement of the overall modeling.

In the upper part of the assembly, which often sports a design unique to each manufacturer, a crown motif was incorporated into the modeling. The shape of a crown, which can also be found in traditional Western architecture and the design of harps, has a strong affinity with chimes as a classical instrument based on church bells, and bears a universal sense of dignity.

The design of the base is intended to inspire a feeling of unity as a part of Yamaha by drawing upon the same visual language used in the arc of the arms on the flagship grand piano model CFX. The iconic large arc, immediately recognizable by the audience without hindering the player's view or performance, establishes the chimes’ identity as a Yamaha orchestral instrument.

Yamaha's identity—a connection to the next generation.

The YCH-7018 and YCH-6018 represent the first model change for Yamaha chimes in about 30 years. In addition to greatly improved sound quality and playability, their finish expresses a significant change in appearance.

Chimes are often used at key points within orchestral compositions, so they are positioned as instruments for which mistakes cannot be tolerated. This promoted us to pursue an arrangement that is specifically intended to facilitate error-free performance.
Typically, the structure from which the tubes hang is such that the front and rear are independent, and the hanging parts are different for each sound tube, so lining up each tube horizontally is no easy task. We therefore engaged in a rethinking and integration of the hangar assembly for this redesign, achieving a high level of alignment. The distinctive rib shape like the bones of a fish that wraps around each tube is designed to increase strength while creating a uniform relationship among all the tubes, making for an integrated structure. The beautiful alignment of all the tubes not only improves their appearance, but also improves functionality to reduce errant strikes. The sound is aligned beautifully when playing glissando by sliding the mallet while striking the tubes, and the tubes in the front and back are now closer than in previous models, making it possible to play faster passages.

The YCH-7018 and YCH-6018 have progressed significantly by taking advantage of a number of other improvements, but there was also a desire not to waste this opportunity that this model change represented simply by focusing on the chimes.
For many Yamaha percussion instruments such as vibraphones and marimbas, we wanted a common design axis for future model changes, and proposed a visual language employing the large arc represented by Yamaha grand pianos. We have already adopted the same shape for the base and pedals of the vibraphone, and hope to expand it in other model changes in the future.
I do not often have the opportunity to witness a model change such as this, which may occur only once in a few decades. However, I believe that as we continue this design language for 10 or 20 years, it will permeate and mature as a part of Yamaha’s identity, becoming an irreplaceable asset.
In fact, a person who worked on the previous model change 30 years ago has become a senior employee and also participated in this project, so I think that even once I retired I would be very happy to pass on this design language.